(Ring, Ring!) This Number Has Been Disconnected!

I am not a hermit or anything, I'm just sometimes a little odd.  Here's an example of what I mean by that.  I am now 100% cellphone-free!  It has been over two weeks since I symbolically cut the cord from my wireless device.

I have never been one to use the phone all that much to start off with.  Well, not for telephonic conversations, at least. 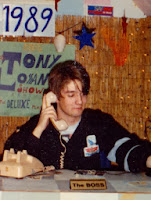 My jobs has always required me to work the phones.  From producing radio to hosting on television, I spend a good amount of my time on the telly.  So, during my free time, I prefer chatting with people in-person.  I have a land-line in my home, but the ringer is not on and I honestly do not know the number.  It is there to call out, which I rarely do.

(I am starting to sound like an old grumpy guy.)

Over the years, I have had many phones with almost each of the four major carriers.  Here are the phones that I had, and starting with the year that I got them...


I loved my Razr, and even though it was a pre-smartphone.  To this day, the battery still can hold a decent charge.  (That may have something to do with the fact that it did not have a touchscreen or 900,000 apps running.)  The weakest part was the flippin' hinge, as if it was dropped the right way, the phone would just snap in half.  On the plus side, it did take decent pictures and worked just fine as a phone.

After the Razr came the Blackberry.  It wasn't a touchscreen, but was my first smartphone.  It took really crappy pics and the battery wasn't that great.  I used it for less than a year.

So I switched to an iPhone.  (Even though, I technically always claimed to have had an EYEphone, even before Steve Jobs announced that Apple was going to make their own phone, called an iPhone.  (I wonder whatever happened to that thing that Steve was trying to promote?)

I really like the iPhone...until it finally succumbed to a dead battery.  Then, I become a bit less enthusiastic for the darn piece of crap.  Apple wouldn't just replace the battery, instead, their policy was to replace the entire phone...for the cost of the phone, unless you have their protection.  Which I did...up until a month prior to the phone dying.  My AppleCare expired.  (Thanks Obama!)

I replaced that phone with a nice disposable LG phone.  That little sucker worked so well, that my little sis is using it today...She is probably on it right this minute talking to her friends, as they read this blog to her, since it does not surf the web.

My most recent phone was the sexy HTC EVO, brought to me by angels who I love dearly.  This phone was just fine.  It was durable, user friendly, and overall a really nice phone.  It was not as lovely as the iPhone, but I bought extra batteries and charged them all of the time.

This way, I would just swap them out whenever I ran out of power.  That worked, until recently, when I "lost" the little guy.  I was going to rush out to replace it, but instead I am taking a break to see how I really feel about having a phone.

So how has my last two weeks been without a smartphone?

First off, I reach for it, and it is not there, which is kind of a weird feeling.  I find myself unsure where to look while riding the CTA.  I miss tracking my speed/miles while biking.  Sexting.  I am not that much into games, but I did do Words With Friends for awhile, and more recently Chess.  I do miss that.  I read the news online.  I took notes on my phone, whenever I thought of something.  I posted a lot of pictures on various social networks, (I am sure the NSA misses me).  I like to Tweet (both the sound and the mini-blogging).

None of that justifies a reason for a new phone.  As I could get a tablet to satisfy most of those tasks.

Perhaps I can also get a cheap phone when I need to hear somebody's voice...


Nah!  It might seem more practical to get one single device, so perhaps I do need another smartphone.  Besides the battery, I always did like the iPhone, and have thought about getting one of the new ones, but not the Gold one...


Or I can just continue as-is and not get any new device.  So far, it has not been too much of an issue.  Of course that is until my friends & family get concerned that I have disconnected...

I am thinking that I should not rush into a two-year contract.  I am going to consider my many options.  Realistically, so far it has been only a few weeks...so it isn't like that I am that out of it...how much can technology advance in this short time...

Alright, I will hurry up and try to figure out my next move.  If you have some suggestions, comments or thoughts, just give me a call...Oh, wait...