Yesterday, Mayor Rahm Emanual said, "we will not preside over a city in which garbage is not picked up, graffiti is not removed"  -  However, graffiti seems to have already gotten worst in Chicago.  I don't recall it being this bad under Mayor Daley.

A few months back, I wrote about this epidemic in Tag You're It! Graffiti Off The Blue Line!

At the time, I submitted a report regarding that graffiti, and then after a month, the Chicago Department: Bureau of Street Operations responded to my request with;

Um, I saw no change on the address that I reported on.

However, I did see as some very talented people paint a cool mural on one of the buildings.  (Who's gonna to interfere with them?)  It looks as if it is a tribute towards what has happened to their neighborhood.  Hopefully they will not be fined like a woman was, when she artistically covered up graffiti on her own property in Warrenville.

Look at what has become of Detroit.  There were a list of things that went wrong, but for the most part, their needs were ignored.  If only people paid attention to the early warning signs, perhaps they could have saved that city from their current doomed situation.  I fear that Chicago could also be on that same long road to disaster. 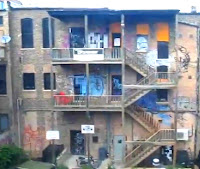 One of my points is to try to defuse the current negative image of Chicago.  With tourists and business people riding the O'Hare line to downtown, from California to Damen, the view from the CTA train looks worst from the back of those buildings than the looked from the front.  With a little attention to the three stops that the blue line is above ground, it might help not scare away people from coming back to Chicago.

No, not one thing will fix everything, but fixing one thing can help make a big difference to the long-term problem.

Maybe the old Graffiti Busters can take a lesson from the CTA, who already does a darn good job keeping their trains and buses clean, even though that they are a pretty big target by the taggers.

What is the CTA's solution to keeping vandals off of their trains and buses?  They are switching them over to the new Ventra card!