I (Kinda-Sorta) Ran The Chicago Marathon With Rudy!

Sunday was the 36th running of the Chicago Marathon and I was there!  I am sure that you have questions, like;


Did I meet any cool celebrities there?

Yes, and I will tell you more about that in a moment.


Why was it not called the 36th "annual" Chicago Marathon?

Well, that is because this marathon had started in 1905 and continued until the early 1920's. It didn't return until 1977.  So the word "annual" would be slightly improper here.


Did you actually run in the marathon?

No, I did not run.  I am not currently in shape to do that...Even though I am an avid biker, I do not last that long when my feet touch the ground.

In fact, whenever anyone asks me if I run, I bark back a punchline from the classic movie "Real Genius"

So every year, instead of running in the marathon, I help put it on your television.  I am a field producer for special events at NBC Chicago.  Most years, I am stationed at the 1 mile mark, right outside of the NBC Tower.

Last year, one of the guests did not show up for their live interview with NBC's Cheryl Scott.  So, at the last minute, I gathered a bunch of clothes that were discarded by the runners, and piled them up on the guest chair next to Cheryl.

Sure, I made it look like she was going to do a wacky interview with them, but in reality, they were a prop for a solid report about how all of the discarded clothes are donated to the Pacific Garden Mission.  I am still waiting for my Emmy Award for that moment.

You can not think that I would be a producer that does traditionally newsie stuff, when I am given the freedom to make a features report fun!

Earlier this year, at the Chicago Auto Show, instead of putting tiny (but awesome) LeeAnn Trotter in a real Jeep vehicle, I had her do her report from a child's toy Jeep.  (I wanted to show that the event was for the entire family)  She loved me for this.

Hello, what did you expect?  I did create and produce a program called The Big Fat Nude Hippo Show!  I like to make things fun if it doesn't conflict with the purpose of the message.  (I am a hard news junkie, with a gift for goofiness.)

From my time doing both TV and radio, I have learned how to best work with celebrities.  They are a special breed.  They are not much different from you or me, except that a lot of strangers recognize and want to meet them.  This could be good or bad, and varies, depending on each situation.

This weekend, I was brought in to the center of the race, and was put in charge of working with some of the stars that were running in the marathon.  This included Sean Astin, (star of movies like, Rudy, The Goonies and something called The Lord Of The Rings Trilogy).  He is also very active these days.  For example, this was Sean's third marathon this year.  I think that he likes to run.

I spent a good portion before the race with Sean.  I have nothing but kind things to say about him.  He wasn't full of himself.  He poised for pictures with whomever asked.  He would take the time out to chat with them.  He got a kick out of people still yelling "Rudy" at him.  (In my experience, not all celebrities embrace their past roles as well as others...Yes, I am talking about YOU "Tootie"!)

At the top of the broadcast, I brought Sean over to do his live interview on NBC in front of the start line.  He was thrilled to see that view, but that was not where he had to be for the start of the race.

So after his interview, with the escort of a security guy, Sean & I had to run back to his section, so that he could join his friends for the race.  Because of heightened security, a simple block long route was turned into a maze that I figured must have been extended to about 26.2 miles.  My calculations could be a bit off, but I didn't think that I was going to do any running, so it was way more than I trained for.

I told Sean, an avid runner, that he could officially add this onto his total running time.  He had no problem doing this jog, as it was a good warm up before the race.  So I kinda-sorta ran the Chicago Marathon with Rudy.

Overall, he was totally a cool kid. (He called me his elder...even though I am only one month older than him.)

I am glad that I have no juicy gossip to share with you, as this may not make a spicy story, but it did make me think of how a great guy he really is.  So for a few hours, he was my BFF. 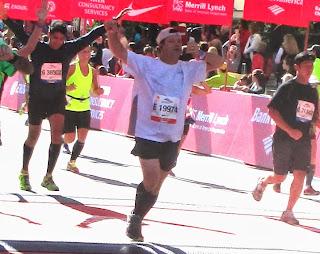 According to the Chicago Sun-Times, Sean's official running time was 4:31:05.  However, my time is still unofficial.