Ventra, still here, and Ventra is still not better, nor simper, nor faster!

I keep reading about how the CTA says that Ventra is improving, but I am guessing that the people at the CTA headquarters are not actually riding any buses or trains to know that this isn't exactly true.  (To their defense, the CTA has delegated their duties to Cubic, which is on the west coast and can't be expected to know what is really going on here.)

So, as a public service, here is a list of a few ways that Ventra is NOT better, according to what I have seen, while actually riding the CTA;

1) Tap, after tap, after tap, more time than not, paying passengers have to repeatedly tap their cards.  It is comical to watch, mostly because I still have the reliable, dependable, lovable; Chicago Card.

2) Each tap, easily takes longer than any Chicago Card tap, or even than the older magnetic strip cards.  This is pretty bad, since the magnetic strip cards have to be dropped into a slot and then they are swooshed back up to read those cards.  Ventra not only takes longer, they are less reliable.  (This is not just limited on the bus, as I often get through the rail turnstiles faster than Ventra card holders, who have a longer wait for their cards to process.)

3) You can buy an old card, and not use it, but just have it in case you might need to take public transportation.  With Ventra, after 18 months of non-use, you will be charged a $5 monthly fee.  More fees also come with this card, but in-fairness, after lots of public pressure, a bunch of other fees have been eliminated...for now.

4) If you had an issue about your CTA cards, you were able to contact the CTA customer service.  With Ventra, they refer you to a private customer service in San Francisco.  This company had overwhelming negative results with complaints.  They have since have less complaints, perhaps because the mandatory switch over has been removed.  I know that I haven't had any complaints...with my Chicago Card.

5) You can see your remaining value with the Chicago Card/magnetic strip card reader.  With Ventra you you do not only know what your your remaining balance is, but you can not tell if you were double, or triple, charged until you sign onto the Ventra website. 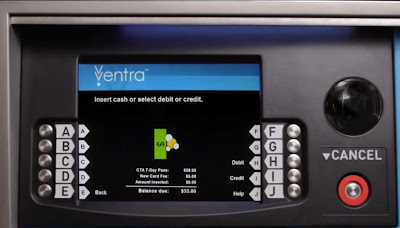 6) With the old CTA cards, the vending machines accepted cash/coin, and gave change.  Ventra machines are exactly the same, except that they do not give change AND that they charge $5 for a new card, or $0.50 for a limited-use media fee for single ride tickets.

Things that they said were better with Ventra:

1) If you lose your card, you won't lose your balance, (as long as you registered your card online).


That is the same deal with the Chicago Card.  No change.


No, far from reality on that one.


You have to order the card, register it online, then call to activate it.  That is one step more than the Chicago Card.

4) Getting a Ventra Card is effectively free.


"Effectively free" is not "Free"!  Whatever amount of money you put into a vending machine, you got a magnetic strip card with that exact value on it.  "Effectively without any fees"!


Why???  Transit cards, should not be in the business of draining people's accounts by their own misuse and possibly a lack of understanding on how to manage their money.  I am not against people learning and properly using debit or credit cards.  I am just against a public transportation system, which is federally funded, to profit form a venture that can cripple an individuals means to get to work. 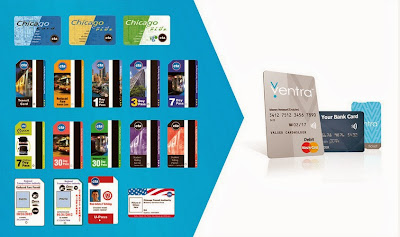 So why is this still going on?  The law that was passed didn't force the CTA to hand off their duties to another company.  It didn't even say that they had to create their own new card.

It basically just said that they had to make it an open system to allow for others to use credit and debit cards;


"The system must allow consumers to use contactless credit cards, debit cards, and prepaid cards to pay for all fixed‑route public transportation services."

Ventra doesn't seem to make riding on the CTA cheaper, more efficient or even safer.  It does possibly appear to make it more profitable for the CTA.

The only good thing that I can write about the CTA, is that their Holiday Train was very cool;

Follow the discussion online, and see what everyone else is saying!

Ventra columns:
Dump Ventra in 2014!
Ventra, No Change! "Stop. Stop. Go."
Ventra, On The Wrong Track!
Just The Beginning Of The Ventra Nightmare?
Follow The $$$ To Answer "Why Ventra?"
How Ventra Stopped Chicago From Working!
Ventra Makes The ObamaCare Registration Look Smooth!
CTA, A Well Run Company, Like A Runaway Train!
Is The CTA Just Messing With Me?