So who exactly is this Heisenberg person?  Is it Mr. White?  To help resolve this mystery, who said the following, Walter Hartwell White or Heisenberg:


"You clearly don't know who you're talking to, so let me clue you in: I am not in danger, Skyler. I am the danger. A guy opens his door and gets shot, and you think that of me? No! I am the one who knocks!" 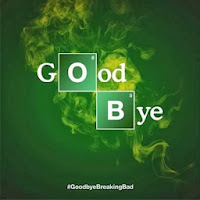 OK, Mr. White aka Heisenberg aka Bryan Cranston, I really do know who you are...and even if I didn't, you've been on my TV, almost non-stop.  Tonight, I am throwing my own Breaking Bad viewing party, even though, it won't have casts members from the series...and AMC has also started without me.  (AMC has been running a Breaking Bad Marathon, since Wednesday night.)

Tonight...only ONE episode matters...the one they call "Felina."  I am expecting so many twists in tonight's episode, that even Chubby Checker will be saying, "Come on baby, give it a rest already!"

Let's look back at the show that put Albuquerque, New Mexico, on the map...for blue meth...but first, an advertisement for e-Meth...


They say home is where the heart is, but I am not sure that I will ever look at this series the same way as I did when I first started watching it when AMC sent me a preview copy of their new series.


What is next, perhaps a Saturday morning cartoon for the kiddies?


If you ever thought that it would be cool to be like Jesse Pinkman, I would remind you, that is only because of the care he got from Obamacare...(ironically, this is also the same reason why Mr. White started dealing meth, cuz he didn't have good healthcare).


...and now another word for our sponsors...

What will Vince Gilligan do next?  Well, this may make him look a bit nutty, but who ever thought that a show about a drug dealing, high school teacher that was dying from cancer, could become one of the greatest series ever?  So this new venture could be a hit too...

...and what really happened to Hank after he was shot and buried?  Yes, there IS more...

The cast made TV history with this series, and a few bucks too, perhaps not Heisenberg wealth, but as they part ways, if they ever need any help...it is only a phone call away...


As coined by the Chicago Red Eye cover this past Friday...FADE TO WHITE. 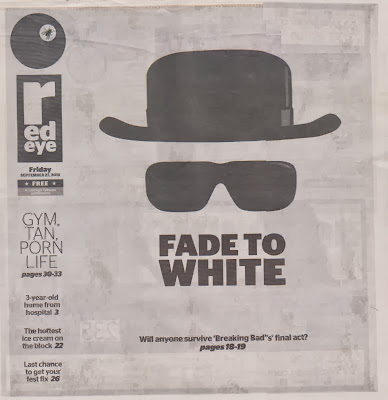 More Breaking Bad: Knock, Knock? I Am The One Who... 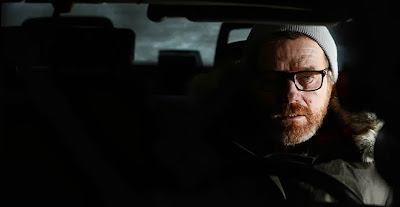