This week Oxford Dictionaries announced "selfie" as their international Word of the Year 2013;

a photograph that one has taken of oneself, typically one taken with a smartphone or webcam and uploaded to a social media website.

How are we suppose to celebrate this?  I kinda hope that it is not by taking more pics of ourselves.  Look, I am one who has taken many selfies, but I am pretty sure that the audience that actually enjoy my pics, is a very small group.

Of course, YOUR selfies are different, as people do want to see them...and by people I mean, mostly you and your group of fans.  Think about it, even if your were a celebrity, how many times would your fans want to see your selfies.  One, two, maybe three...but if the interest from you fan didn't taper off by then, you might just have an official stalker. 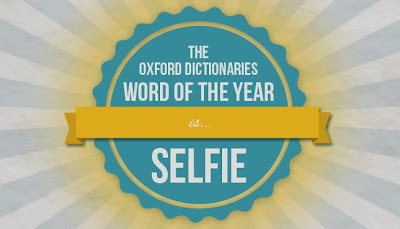 Taking pictures of one self, is not new, as selfies predates even cameras.   Most only children, or ones with siblings who can't take a decent photo, have been taking their own pics, for most of their lives.  I am just not sure if there is an understanding on when is the right time to take a pic of oneself.  Using social media, most individuals should now have a personal photography editor, who approves each pic, before any online postings occur.

As for the word "selfie", well that was first used in an Australian internet science forum posting.


"Um, drunk at a mates 21st, I tripped ofer [sic] and landed lip first (with front teeth coming a very close second) on a set of steps.
"I had a hole about 1cm long right through my bottom lip. And sorry about the focus, it was a selfie."


"Anyone wanna see a picture of it? It's pretty cool."


If you still insist on making selfies, try to be considerate of others, who have to see them.  May I suggest, to try to be a little more interesting with your selfies, other than making duck lips.  Perhaps, include some props, a cute animal, a spatula, etc.  Give it some thought.  Just because you can see yourself in the bathroom mirror, doesn't mean that is the time to snap a shot.

Also, remember, whatever you share, will be out there forever!  So, be proud of what you do or be ready for it to come and bite in on the behind one day.

Here are some tips of what to (or not to) to, when taking your own pics;

On February 28, 2014, President Obama, Bill Nye, Neil deGrasse Tyson took an epic geek selfie.  Then on March 2, 2014, Ellen DeGeneres crashed Twitter with her Oscar selfie.  Now it is my turn with a few Chicago legends!