For over 15 years, I produced a Chicago television program called The Big Fat Naked Rhino Show (or something like that...we'll just call it "the show").  Media columnist, Robert Feder, once told me that my show had "a parade of stars" on it each week.  I'll have to take his word on that, as the show was first only shown on cable in Chicago, and then it moved to the even less watched NBC 5.2 digital channel.  I never got those channels. Don't get me wrong, my cable carried the channels, I just didn't know where they were on my TV listings.

Ironically, the show was family friendly and never had any nudity, but our most frequent guest was an expert of nudity...Well, female celebrity nudity, to be exact.  You may know him as Mr. Skin of www.MrSkin.com, but I knew him as "Skinny" (a nickname that I chose to give him, since, at that time, he didn't want to go by his real name; Jim McBride).

Mr. Skin got his biggest fame from being a regular guest on The Howard Stern Show, dating back to 2000.  Movie goers may have been first exposed (pun intended) to Mr. Skin in the 2007 movie; Knocked Up:


[Mr. Skin shares a complete update with me, at the end of this blog!]

But before all of that, back in 1998, with the assistance of Harry Teinowitz (and the blessing from Steve Dahl), Mr. Skin made his first television appearance on my program:


That appearance was a year before he even had the website.  At this point, he was appearing on local radio, showcasing his ability to name details about each female celebrity nude scene, all off the top of his head.  Anytime he was asked, he had the details.  He had a perfect record every time.

During that first appearance, right outside of the studio, former news anchor; Warner Saunders, Secretary of State; Jesse White and other guests were quizzing Skinny on various movie stars.  Not only did he instantly know every scene each hot young actress just did, but when one of them asked about Jayne Mansfield, without skipping a beat, he named every flick that she was exposed in.

I don't think that you can throw him a curve ball, by naming someone like Jessica Tandy, as he could tell you about her scene too...Just not sure why anyone would ask that.  (OK, it was our show that asked that one, but we were testing his knowledge.  We were impressed and somewhat queasy with his knowledge).

He continued to make many other appearances on our program, even after we switched to a new channel, which was a part of the City of Chicago Mayor's office.  I did have to get a little clever, as we could not just have Mr. Skin blatantly talking about female celebrity nudity.  So I came up with the ADVICE FROM MR. SKIN FOR PARENTS segment.  Now, Mr. Skin would come on my show and warn viewing parents what kind of nudity and exactly when does it appear in the movie (or TV show), so that you can "avoid"  it.  (It was still the exact same shtick, just now as a public service).

In 1999, I got to be a beta tester for his new website.  It was grueling.  It was a great site, but how was he going to do this...He explained to me that he just discovered a way to avoid being sued.  This was the era when Lin Milano, Alyssa's mom was suing people/companies for uploading naked photos of celebrities on various websites.

That is when Skinny told me that he was going to become a movie critic and rate each nude scene.  If Siskel & Ebert could show clips from films for review, then how could the movie companies deny Mr. Skin from doing the same with a more narrow focus on each film.

Doing movie reviews on a single particular topic was not unheard of, as another regular on the show, was; Buzz Kilman, who also reviewed movies.  However, instead of focusing on nudity, he focused on moments in film that he said  "celebrates blood, guts and celluloid death in movies, regardless of their redeeming social, artistic or intellectual value."  (Way before my show, Buzz did these reviews on the radio and on Comedy Central with local artist, Tony Fitzpatrick, as his co-host.)

So does Mr. Skin have anything to worry about?  Nope.  With his reach and promotional abilities, Mr. Skin has actually been embraced by the film industry.  According to a 2007 article in The New York Times, "movie studios not only tolerate Mr. McBride but also court him by sending advance screeners of DVD releases."
Here's a complete update about Mr. Skin, in his own words: 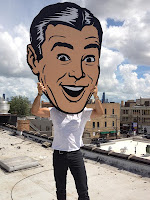 On August 10th the site will have been live 14 years! It's hard to believe I've been doing this that long. 2013 is shaping up to be our best year EVER. I have a great and loyal team of 35 skinployees who are all dedicated to making MrSkin.com one of the best sites on the internet. I'm very lucky.

We have so many new things at the site since you first (master) beta tested the site back in the day. Obviously the content itself has grown so much. I started with 1000 actress in 1999 and today we have full skinographies on over 20,000 actresses. Also with all the nudity on the great TV shows like Game of Thrones, Californication, Boardwalk Empire, and all the lesser known shows on Cinemax and the Starz network there is more celebrity nudity out there then ever before.

We added playlists to the website in 2011. A playlist is a video super cut of a single topic. So now you can come to MrSkin.com and peruse 100s of playlists of topics like Naked Girls With Guns,  Best Lesbian Scenes, Teacher/Student Scenes, Best Group Shower Scenes, etc. It's become a very popular part of our site as you can imagine.


I have been married for 10 years. You and your Nude Hippo crew were actually there the night I met my wife. In May of 1999 I was at Pete McMurray's one year anniversary show at a bar and I met my future wife. You guys interviewed her and I and I still have that tape. It's pretty cool to have a video of the night you met your wife. We have 3 kids. Girl 9, Boy 7, and Girl 5. We live in the north suburbs.

I went on the LIVE NUDE HIPPO show back in 1998 well before I even launched MrSkin.com. You were the first TV show I was ever on. I remember being really nervous before I went on your live show in front of a studio audience - but you guys were all very cool and laid back and it went very well. I have fond memories of those days!