For a couple of years in the late 80's to early 90's, I wrote an entertainment column.  It was simply a little thing which I called "etc."  (Thus why my blog today is called "Tony Lossano, etc.")

I made many observations, conducted interviews, did an annual opinion poll about celebrities.  However, there was one column that I was not able to write...Until now!

Well, actually it was just suppose to be a short observation, a quick blurb, really, a visual thing that filled some space and made you think, "Well that was interesting!"

Here is how the blurb should have gone in my column, back in 1988:

MTV has stopped playing music videos for a half-hour, to play a game show called REMOTE CONTROL.  This first thing that I noticed when I saw the REMOTE CONTROL logo was how it reminded me of the logo from the old ROMPER ROOM show:

THAT'S IT!   That is all I wanted to write...and today it took me 0.21 of a second, according to Google, to do a search for this Romper Room logo... 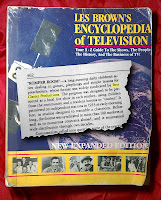 This was before people like me had the interweb, and even if you did, it was a dial-up and there was no Google.  So, I had to search for it the old fashion way.  I first went into my 1982 edition of Les Brown's Encyclopedia of Television that I owned.  There was no logo in it, but there was the name of the production company.  Bert Claster Productions produced & created Romper Room in 1953. (Bert's wife Nancy was the first Baltimore host as Miss Nancy).  I couldn't locate a Bert Claster Productions, so with the Chicago Public Library's help, I discovered that Bert's son John took over and was the president of Claster Television Productions.  I tracked John down and told him that I was doing a story about Romper Room and needed a copy of the logo.  He explained to me that his production company had a fire and they lost almost everything, including copies of the logo.  Back to the library I went. 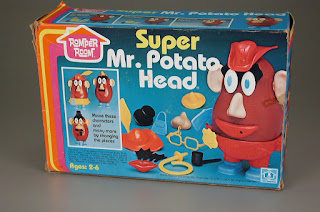 I discovered that Romper Room was licensed out to Hasbro, as they made toys with the Romper Room logo on them.  I called them and after a few days, they got back to me and told me that they could not find any copies of the logo, so back to the Chicago Public Library I went.

I found that the show aired locally on WGN TV and WFLD TV.  I contacted people at each station.  WFLD told me that they did not retain anything from their broadcast history prior to becoming Fox.  WGN seemed to really look into my request and responded with no real results, but they did suggest that I go look for old TV advertisements.

I called TV Guide, but never got a response, so I just headed to the show biz retro store, Metro Golden Memories, on Addison St. in Chicago.  They had many items, including vintage TV Guides.  I went through every page of each edition that they had available, but not a single ad for Romper Room.

At this point, I decided to bail on this task.  It was taking way too much time, for something that wasn't going to be that big of a deal.

Now, 25 years later, I decided to revisit this, knowing that it would be a simple task.  Finding the Romper Room logo was easy, but with my recent research, something else was also revealed...

In 1988, I was looking to the past for a copy of the logo...but I discovered that Romper Room was still in the stores with toys and on my TV with a show.  Instead of traveling everywhere, asking for others for help, looking through archives and old TV Guides. The Romper Room logo was right there, on WPWR TV in Chicago ('91).  It was probably in the new TV Guide, sitting on my living room coffee table.

The logo was still on Hasbro toys, perhaps because Claster Television Productions was really a division of Hasbro industries.   Why didn't I know this?  How could have I not found this tidbit during my three month search?

So, last night, I contacted TV historians Ted Okuda, Mark Yurkiw and Steve "The Video Veteran" Jajkowski to help clear up how I missed knowing that Romper Room was in production from 1953 until 1994.


Ted Okuda:
WPWR evidently aired the nationally syndicated version, which ceased production in 1994. The locally-produced version ended with WGN in 1975.

Mark Yurkiw:
In 1981 the name of the show was changed to ROMPER ROOM AND FRIENDS, with a different theme song. This aired on Channel 32 for a while and later on Channel 50. I watched BULLWINKLE on Channel 50 in the early 1990s and sometimes it was preceded by ROMPER ROOM AND FRIENDS. Sometimes I'd catch the closing credits and the copyright year was always 1981. I think that's true of any version that says ROMPER ROOM AND FRIENDS. They probably did a season's worth of shows and just kept rerunning them like Larry Harmon did with BOZO'S BIG TOP. I remember seeing a story about the show ending in 1994 or so, but I think that just meant they quit showing the reruns, as it had been out of production for many years.

Ted Okuda:
The show's history is more convoluted than one would initially think.

Steve Jajkowski:
Truth be told, I had no idea (Romper Room) was running as late as 1991.

Ted Okuda:
Now, if HE doesn't know, then it's really a stumper!

Steve Jajkowski:
Fascinating! You may have stumbled onto some deep dark conspiracy! LOL!

While reviewing the book, The Golden Age of Children's Television in Chicago, (which I produced into a TV special), I was reminded that on April 21, 2001, I actually met Beverly Marston Braun (Miss Beverly on Romper Room).  We were in my old TV studios, when she appeared at an event for The Museum of Broadcast Communications.  I remember her to be nothing but pleasant.  She signed my poster.  It was very brief but very awesome.

All of this started with the simple idea of showing the similarities of two logos.  It began with a three month search, and 25 years later, it only took 0.21 of a second to discover that I am just the worst investigator of all time!  I should have pursued my first desire, which was to carry-on after Ken Ober as the new host on MTV's Remote Control!

This is the show that made me wanted to host a game show when I grew up.  One day, I will grow up.  Until then, I knew most of the answers on this show.  This was MTV's first original non-musical program, which ultimately will lead to programming that features a Snooki (who was only one at the time of this broadcast)!