I have been writing here about my troubles with the CTA, more often than I would really like.  First off, what is the big difference between Ventra & ObamaCare?

There is an actual need for a change with our healthcare system.  So, why is the CTA switching to a less user friendly system?   Sure, it wasn't perfect, as even my Chicago Card, just last week didn't always registered when I tapped it. 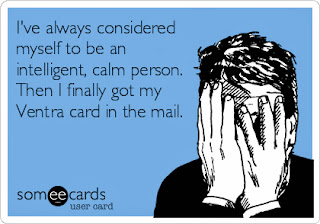 I have been reading online some of the complaints about Ventra;  Trouble with activating or loading money.  Long waits on hold for customer service.  Still waiting for Ventra cards.  Improper charges.   ...and that the Ventra card takes longer to register when boarding a bus or at train stations. Awesome!  I am so looking forward to joining in on the Ventra fun!

Last week, I went to the CTA headquarters, TWICE.  The first time, they were closed, so I just "enjoyed" their lobby.  The next day, I went back, where they did quickly reissued me a new Chicago Card.  When I asked about the status of my Ventra cards, I was sent out in the hall.  (That is where they were answering questions regarding Ventra)


I checked to see my status on my Ventra Cards, (I have three Chicago Cards.  I know, I am such a playa'!).  Two were confirmed, my third one was not, which I confirmed right then and there.

The very next day, I received the two Ventra cards.  It included a "Quick Start Guide" for "Transit and Beyond" BUT it appears that it has very little helpful info on how to quickly start the process of activating your card...In fact, it hardly mentions about the transit aspect and seems to focus on the "Prepaid Debit Account" aspect.  So it should tout "Beyond Transit" if anything.

Kevin O'Neil, a Chicago Now blogger has a better guide on what to do to activate your transit portion of Ventra.

It is amazing, how the CTA transferred their own business responsibilities to another company.  In yesterday's Chicago Tribune:


Pace spokesman Patrick Wilmot said Pace has received numerous complaints from customers who haven't been able to get through to Ventra customer service on the phone. "The best thing for people to do is to refer these questions directly to Ventra"

In my first article on this, I mentioned how I got the impression that the CTA was hands-off from Ventra.  The Trib points out:

So if you hire a babysitter, or nanny, to care for your children, (just like the CTA hiring Ventra), you too will be free from any responsibilities and should not be bothered with any of the details?


"The CTA recently directed the Ventra vendor to double its customer service staff to meet call demand, and we expect to see improvements shortly."

Good to know that the CTA is getting somewhat involved. 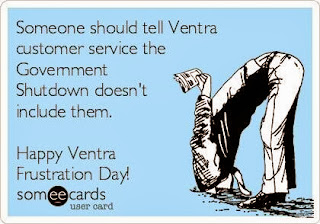 You will have to have a phone and online access to register your Ventra card...If you don't, then walk...

Simple instructions, if you are not already actively tied in with a Chicago Card...

Dependability, well, that is apparently not included in the basic plan...

It's like Russian roulette every time I try to use my #ventra card #VentraVents #fail
— Emily Finlay (@emfinlay) October 7, 2013

I never got this email, but it would be helpful with making this a bit more convenient...

Irony is the e-mail #Ventra sends you with your username and password has a subject of: "Convenience is Coming" #VentraVents
— Mike Zoller (@mikezoller) October 8, 2013

Activating your #Ventra Card is easy! Simply visit our website, enter your Card number, douse your hair in gasoline and light it on fire!
— Ventra Chicago (@chicagoventra) October 7, 2013

The Chicago Card was just working fine.  This was their attempt to get to a cash-free system.  Now with Ventra, they might not only get that cash-free system, but they could see a rider-less system.

From what I can gather, the CTA gets a majority of their funding from other areas beyond their riders.  I am not an accountant, so you can review the CTA's financial statements for yourself, but here's what I have found...

How much came from passengers:

This says to me, that since the CTA receives supplemental funding for operating expenses, they may be alright with not having any customers.  Perhaps they have something to do with an alternative option for your public transportation...

Is coincidence that both use a double "V" in their logo?  Or have you noticed that the Divvy Bike program just happened to be established right before the launch of the Ventra card.

Divvy bikes cost $7 a day, but must dock after thirty minutes.  Um, who just wants to take a nice walk to work with me?